Home Education “I can’t move the mountains for you; But you are not alone in this”
07 Nov 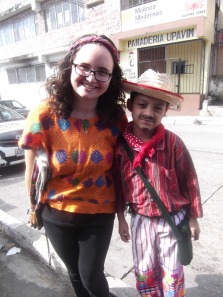 David is ten years old, and he is one of our morning students in Reforzamiento (in the mornings we have more individualized tutoring with students that do not go to formal schooling, for a variety of reasons.) He was removed from public schools after failing the first grade three times.

I cannot say firsthand how much he knew or did not know when he started at Reforz, but I have been told that he knew nothing of letters and could barely count. He has made a lot of progress, though, since beginning to study at Reforz with a variety of different volunteers – slow progress, but progress nonetheless. He can now read; he is very good at math: addition, subtraction, multiplication. He loves science.

He is difficult to work with, though, to say the least. He has an extremely difficult time focusing, for starters. He is very easily distracted, very easily bored. He has extreme mood swings. He gets extremely angry over the smallest things (one time Linda asked him to back up a few steps from where he was standing; he didn’t talk to either of us for a few days after that.)

He is violent: more so verbally than anything else, but he is certainly not above pushing other students, slamming doors, or pretending that most anything is a gun and firing off said gun (one day, I took away the Legos that he insisted on piecing together in the form of a gun. And I mean a complex gun: several of the pieces he was able to move up and down so as to resemble pulling a trigger when he would pretend to fire it. It shook me, to say the least. He was mad at me for several days after that.) He does not get along well with many other children: he is sensitive; he is short-tempered; he has a big mouth which he runs far, far too often. I would say that all of this certainly contributed to the problems that he had when he was in school, and continue to contribute to the difficulties he is still having today.

[blockquote align=”none”]I know that, deep down, he wants to learn; he wants to succeed. I know how incredible of a boy he is, despite all of the moments he would leave me wanting to believe otherwise.[/blockquote]
I was casually working with him in the mornings for my first few weeks at Reforz – some days he would feel like working, some days he wouldn’t – but I didn’t force too much on him. One morning after he had left, Reyna said to me, “You know, he’s never going to be able to go back to school. He’s too old.”

I stopped whatever it was that I was doing at that moment, unsure of how to process what she was telling me, the fact that this ten-year-old boy would simply never have a chance at an education again.

I said, “What? Never?” and she went on to explain that though he was too old to go back to the first grade, he would have the option, in January (when the next school year begins) to take a placement test for the second or third grade, but he would have to prepare for that with us, in Reforz. In one month’s time (this was around the end of September; Reforzamiento ends when the school year ends, which is the end of October.)

And so that is how David became “my” student. I brought a pile of books upstairs with me that weekend; I tried creating a plan for the month that rested somewhere between what a second and third grade curriculum should look like and what the most certainly underdeveloped curriculum of the schools of this area does look like.

But, regardless of any plans I could have ever developed, working with David could not be contained to a simple syllabus, or a four-week plan. Every day was its own adventure. As already mentioned, there were times when his attitude would fluctuate so severely we just could get no work done. He would impose the silent treatment on me for a time more days than not. He would get in verbal arguments with other students in the room. He would snap at me for giving him homework. He walked out on me one time; he had been scolded one too many times that day, I suppose, and he decided it would be better if he just left.

So many times when working with him, I bit my tongue when I just wanted to scream, You need this. You need to pass this test. You need to be back in school. You are ten years old. I can’t watch you give up on yourself. I can’t stand by and let you not have a future. Pay attention. Study. Please. Please.

That was of course not the right approach, and I’m glad that I never did it. But some days… the anger, the frustration… I am not exaggerating when I say that this was one of the hardest things I have ever had to do.  It was made that much harder when I would remind myself just how important it was to stick with it, to stick with him. How I couldn’t give up.

Perhaps my favorite memory of him took place about two weeks ago. I had been sick with a bad cold for about a week and it wasn’t getting much better, and I think he took pity on my lack of voice, my congestion, and the tissue permanently in my hand. He said he wanted to read a story (not entirely in his nature, but a welcomed change) and I half-joked with him that I couldn’t do it because I didn’t have a voice. We compromised, then, and decided we’d read it together, alternating page for page. We laid down together on the cushions we have in the back of the room for our kindergarten class, he placed his head on my lap, I held the book up, and, cuddled up, we read the whole book together. I am still torn as to which I am more surprised by: how darn adorable he was, or the fact that he was able to sit still and get through a whole book. Both of which were beautiful.

[one_third][divider_line][/one_third][two_third] [/two_third][two_third_last] [/two_third_last]
[blockquote align=”none”]If I have at all lost track of just why I am here working in Reforzamiento, living in La Esperanza, David has reminded me.[/blockquote]
For all of the protesting he put forth, for all of the attitudes and the mood swings he would undergo, I know that, deep down, he wants to learn; he wants to succeed. I know how incredible of a boy he is, despite all of the moments he would leave me wanting to believe otherwise. He, primarily on his own accord, started attending Reforzamiento for two hours per day to have more time to prepare for the exam, as opposed to just the one that he had been coming for. He would complain about the fact that I gave him homework, but he would still do it every night, and he would still do it well. He would roll his eyes when I said we were going to do more math, but I know how proud he is of how quickly he learned the first ten multiplication tables, the multiplication chart that he himself completed and that we then laminated, and the big checkmarks that I would draw on each assignment that he completed.

One of the most important moments I believe I had with him was a complete accident. During our Día del Niño activities a few weeks back, Reyna yelled at him for one thing or another, and he fell into one of his moods. He informed me that he would no longer be coming to Reforz because he gets yelled at for every little thing and there’s no point in him coming. I, meanwhile, was battling a head cold, trying to keep twelve kindergarteners from running too rampant, dressed as Minnie Mouse, and, frankly, not in the mood for another one of his little fits. I replied, then (half-heartedly, in every sense of the term), Okay, don’t come back. What are you going to do then? He stopped, and looked a bit taken aback. He muttered back, I don’t care. I’m just not coming back here. I repeated, Okay, but answer me, what are you going to do every day if you don’t go to school? He got quiet then, and I would like to think that it is because he was thinking just that: what would he do everyday if he wasn’t in school? What would the rest of his life look like? (Of course he was back in Reforz the following morning).

As I mentioned, this past Friday was my last day of working with him one-on-one because the Guatemalan school year has just ended and “normal” Reforzamiento is on break until January. I had pretty mixed feelings about our time together coming to an end; relieved (selfishly) in one sense that the daily struggle with him would be over, defeated in another sense when thinking about how much of his “syllabus” we never even touched, and sad because, for better or worse, I love the little guy and I’m going to miss him.

I asked him, teasingly, early in the morning on Friday if he was going to miss me, too; he surprisingly got ten-year-old boy shy, kissed my cheek, and confirmed that yes, he was. He then, near the end of the class, took my camera and began fooling around, taking pictures and filming videos, or so I thought.

It turns out, I would learn later, he was actually in the corner of the classroom by himself recording me a two-minute message, in which he told me how much he loves me, how much he is going to miss me, and thank you. On his way out he gave me back my camera, gave me a huge hug (multiple, really), and told me to watch the video later, that it was a surprise.

The rollercoaster of emotions that he and I rode together for the past month all culminated to what I felt while listening to that message. I still don’t know what to say about it. I was (am) so surprised, so touched.

For all of the times he drove me completely insane, for how mad he would make me me, for how many times I just wanted to give up, he showed me why I stuck with it. He made it worth it. If I have at all lost track of just why I am here working in Reforzamiento, living in La Esperanza, David has reminded me.

But I also know that in the last month he learned how to write his last name; he learned how to multiply; he proved to himself that he can read entire books. And I am able to find comfort in the fact that he knows that we in Reforzamiento do love him; that we do truly want what is best for him; that he is not alone; that he has not been given up on. He proved that to me with this video, with the hug that he gave me on his way out the door last Friday. And in so many ways, that is so much more important than any other lesson I could have ever taught him.